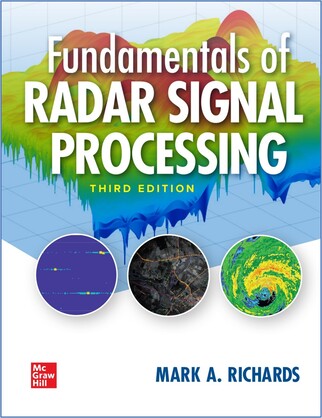 About the Book
Fundamentals of Radar Signal Processing (FRSP) provides in-depth coverage of fundamental topics in radar signal processing from a digital signal processing perspective. The techniques of linear systems, filtering, sampling, and Fourier analysis techniques and interpretations are used throughout to provide a modern and unified tutorial approach. The coverage includes a full range of the basic signal processing techniques upon which all radar systems rely, including such topics as target and interference models, matched filtering, waveform design, Doppler processing, parameter estimation, and threshold detection and CFAR. In addition, introductions are provided to the advanced topics of tracking, synthetic aperture imaging, and space-time adaptive array processing.

This book fills a void in the technical literature on radar. That literature offers a number of excellent books on radar systems in general. At the opposite end of the spectrum, a number of quality texts on advanced topics in radar signal processing such as synthetic aperture imaging, space-time adaptive processing, and MIMO radar have appeared in recent years. However, there is a substantial gap between the qualitative systems books and the advanced signal processing books. Since its first edition, FRSP has sought to bridge that gap by providing a concise, unified, and modern treatment of the basic radar signal processing techniques upon which these more advanced methods build.

New in the Third Edition
The third edition of FRSP has several new additions, reflecting the evolution of radar signal processing since the first and second editions in 2005 and 2014:
About the Author
Mark A. Richards, Ph.D., is an educator and consultant with over 35 years of experience in radar signal processing practice and education, primarily (approximately 20 years) at the Georgia Tech Research Institute (GTRI) where he last served as Chief of the Radar Systems Division. His work there focused on topics such as millimeter wave target detection and classification, electronic warfare for imaging radars, airborne windshear detection, and embedded extreme-scale ISR applications. His time at GTRI was followed by 11 years of teaching and research in signal processing and high performance computing with Georgia Tech’s School of Electrical and Computer Engineering. Other previous positions included technical and program management staff at ESL, Lockheed-Georgia Company, and the U.S. Defense Advanced Research Projects Agency (DARPA).